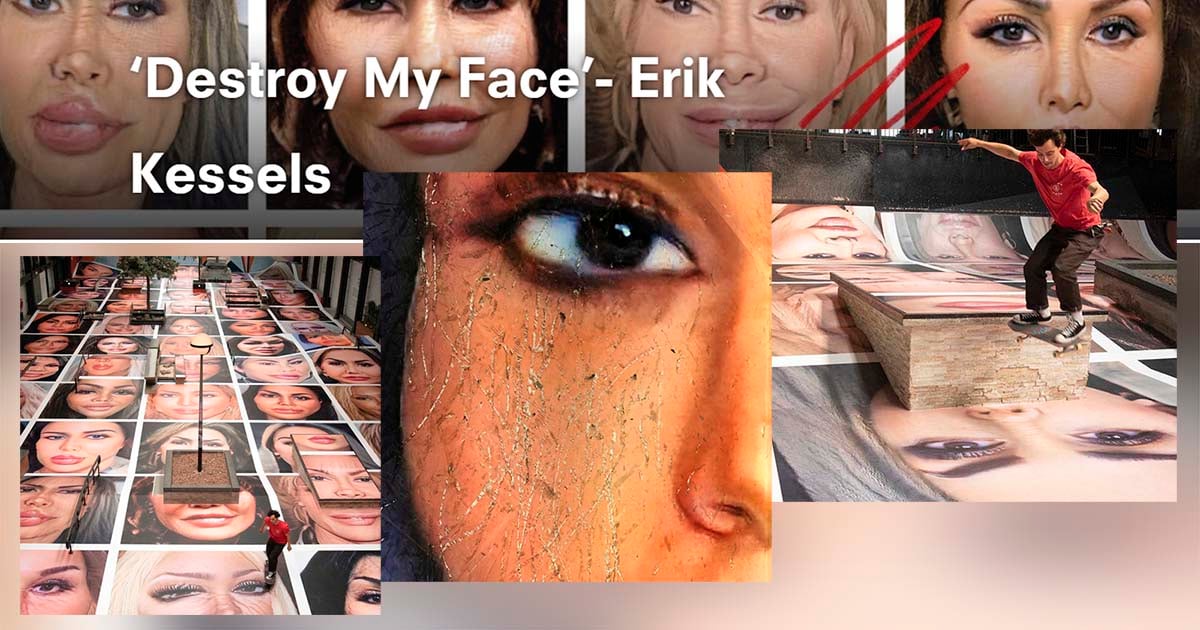 Dutch photo artist Erik Kessels has sparked outrage with his latest art installation, titled “Destroy My Face.” Kessels covered the ground of a skate park with portraits of women who have had plastic surgery and then invited skateboarders to shred them up by riding over them.

The installation was opened to the public on September 9th, and the launch was publicized by Kessels, the skate park (Pier15 Skatepark in Breda), and BredaPhoto Festival (the largest international photo festival in the Benelux).

“Plastic surgery has become something pretty normal in today’s society. However, when taken overboard, these surgeries can result in deformation and transforms mankind into monsters,” BredaPhoto writes. “Dutch artist Erik Kessels will showcase these archetypical faces in a grid, to be seen in a very unusual spot, where visitors can interact and interfere with these faces. As easy as they were once made beautiful, as easy they are now destroyed.”

Dazed reports that the installation has already received a significant amount of backlash, with many denouncing it as misogynistic and art that encourages violence against women.

A group of photographers and other creatives have published an open letter denouncing the artwork and calling for its removal.

“With a title like ‘Destroy My Face’, we assume that the point of this work was to elicit a response like this,” the letter reads. “It is in your face, pointed, and most of all, violent.

“This title, as well as your decision to place this work on the floor of a skatepark where female-presenting individuals can be trampled and skated over by skaters, reproduces this sentiment. By placing this work in a public space like Skatepark Pier15, another insult to injury is added. Skateparks and other public spaces should be places that are open and free to use by all who wish to come, and where people should not be ridiculed or judged based on what they look like.”

“[W]e are frustrated with BredaPhoto,” the open letter states. “As one of the more prominent photo-festivals in the Netherlands, BredaPhoto has the potential to talk about and stand against stigma and toxic systems in our (visual) culture but has nevertheless decided to fund this project. A work that does nothing but reinforce clichés in our visual culture while it shames and degrades the choices that people have made in regards to their own bodies.

“We cannot excuse the rampant sexism, racism and other biases that are still so ingrained within our cultural institutions – especially not in the difficult financial times of today where it is already hard enough to get projects funded. We do not understand how BredaPhoto accepted, financed and executed this proposal – and know that you can do better.”

The letter calls for the installation to be removed, for an explanation, and for transparency and accountability moving forward.

You can read (and sign) the full open letter here. We’ve reached out to Kessels for comment and will update this article if/when we receive a response.

Update: Here’s a statement provided by Kessels in response to the controversy:

Plastic surgery has become something pretty normal in today’s society. However, when taken overboard, these surgeries can result in deformations. The representation of oneself and what is real seem to blur more and more. The same can be said for how we present the image of ourselves online. Being insta-perfect can become the norm instead of the exception and we can manipulate our image in several seconds. The deformation that once started with plastic surgery will continue in this installation while skaters create another uncontrolled reality. Machine learning, as another artificial intervention, was used to generate the selection after entering all, male and female, available online plastic surgery portraits.

The intention of this work is ironic and intends to evoke a dialogue about self-acceptance. Of course it doesn’t mean to encourage violence against women. With this work I never wanted to offend anyone, but when reading recent comments online, I understand I’ve done so and I apologise for that. In my opinion the function of art in society is to start dialogues and I continue to believe in that.

Kessels says the festival will be releasing a longer statement shortly.