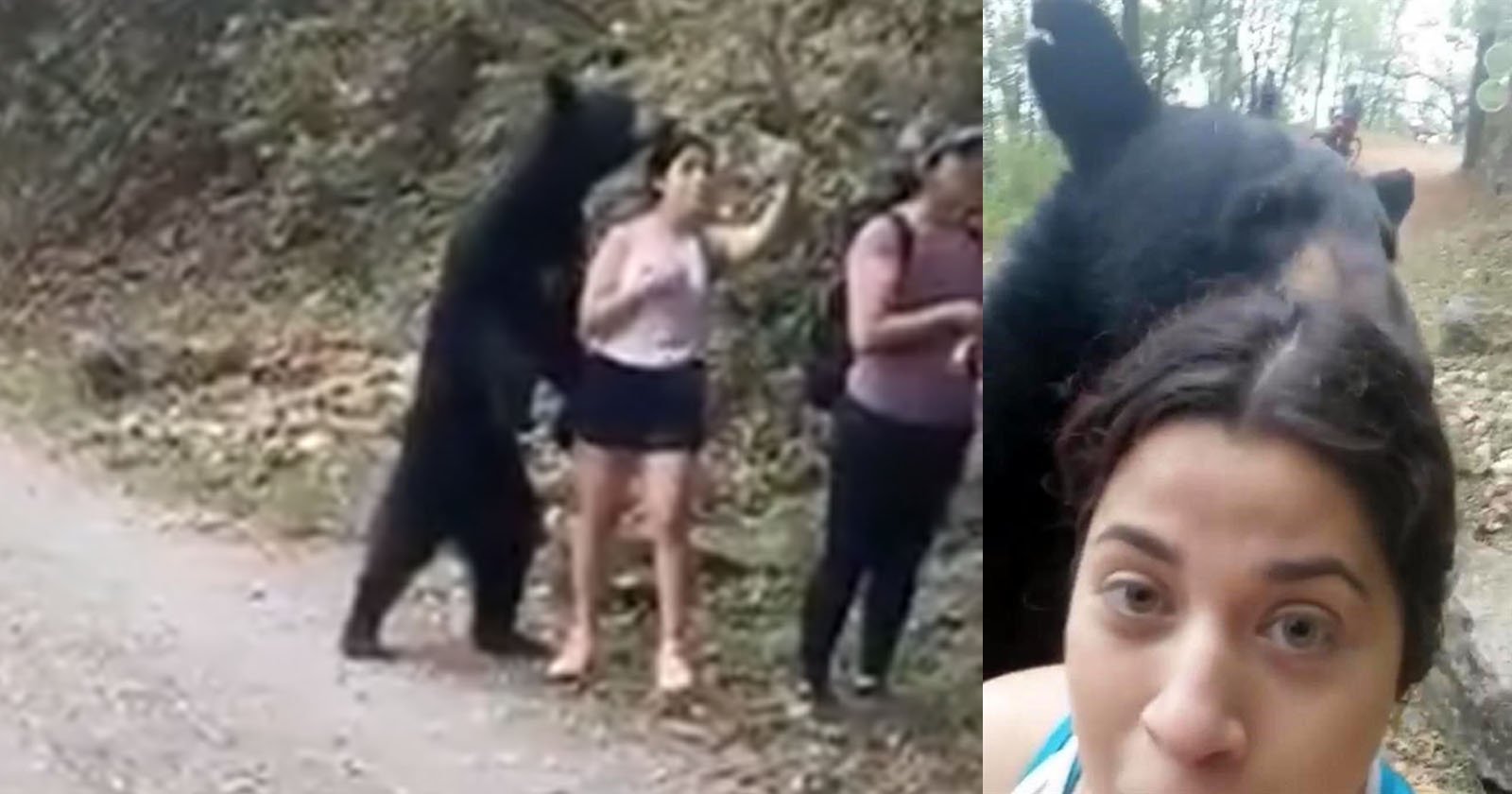 A woman was hiking on a trail in Mexico’s Chipinque Ecological Park recently when she was approached by a curious black bear. As the bear stood on its hind legs sniffing her hair, she decided to raise her phone and snap a selfie.

In two videos of the encounter, the bear can be seen walking up to the group of hikers before it focuses on one of the women, smelling and pawing at her.

This is called a close shave! This is from Chipinque Ecological Park, San Pedro, Mexico. I like the cheek of the hiker to take a selfie when the bear was sniffing her hair. (Only an hour ago I tweeted about bears in @arakucoffeein for jackfruits @saffrontrail) pic.twitter.com/T7faYTh4GF

This girl has nerves of steel.

She actually took a selfie with the big guy… pic.twitter.com/I3Ezyn8q7G

Perhaps unsure of what to do in the moment, and not wanting to miss out on the once-in-a-lifetime photo op, the woman slowly and casually shoots a photo of herself with the bear right behind her.

When your scared of the bear but it’s is a social media post of a lifetime. “I am not throwin’ away my shot”. Bear selfie! 🐻👩🏻🤳🏼 pic.twitter.com/BKhNZNl3pl

For everyone who wanted to see the selfie she took as a bear stood over her…here it is. pic.twitter.com/O6Fa9WrTkE

You should know that shooting a selfie definitely isn’t the recommended way to survive a black bear encounter, nor is standing perfectly still. Experts recommend facing the black bear directly, making yourself as large as possible, and making as much noise as possible — and if the black bear attacks you, you’re advised to fight back.

As this bear encounter video spread across the Web, Chipinque Ecological Park issued this statement this past weekend:

First of all we want to communicate that we are relieved that people were unharmed. We thank the visitors who gave their support to the three people and we recognise the calm they maintained during the tense moment they lived through.

This type of approach by the black bear to the visitor is an abnormal behaviour caused by humans. The interaction shown in the video should have been avoided. What is indicated is to move away when detecting the presence of the bear and not get closer; however we see that even the person seeks to take a photo.

Given the above, Chipinque will take strict measures against visitors who put their life and / or wildlife at risk. Remember that Chipinque is a protected natural area, home to wild flora and fauna, so the sighting of mammals is not unusual, and it is the responsibility of the visitor to stay alert during his visit, avoid getting close and report the presence of a bear to our park rangers.

It’s unclear from the circulating videos whether the group spotted the bear and had an opportunity to distance themselves prior to it approaching them.

The Humane Society of the United States also issued a statement in response to the videos and selfie.

“Allowing yourself to be close to a bear or stopping to take a selfie with a wild animal is taking your life in your own hands, and goes against everything you should do to protect yourself and the animal.” – John Griffin, HSUS via @Newsweek https://t.co/L57RKg6SPN

“Allowing yourself to be close to a bear or stopping to take a selfie with a wild animal is taking your life in your own hands, and goes against everything you should do to protect yourself and the animal,” says John Griffin, director of HSUS’s Humane Wildlife Services Department.

Earlier this month, a woman in Romania was slammed by the Internet after being caught on camera approaching a bear on the side of the road to take photos with it, only to barely escape when the bear suddenly lunged at her.