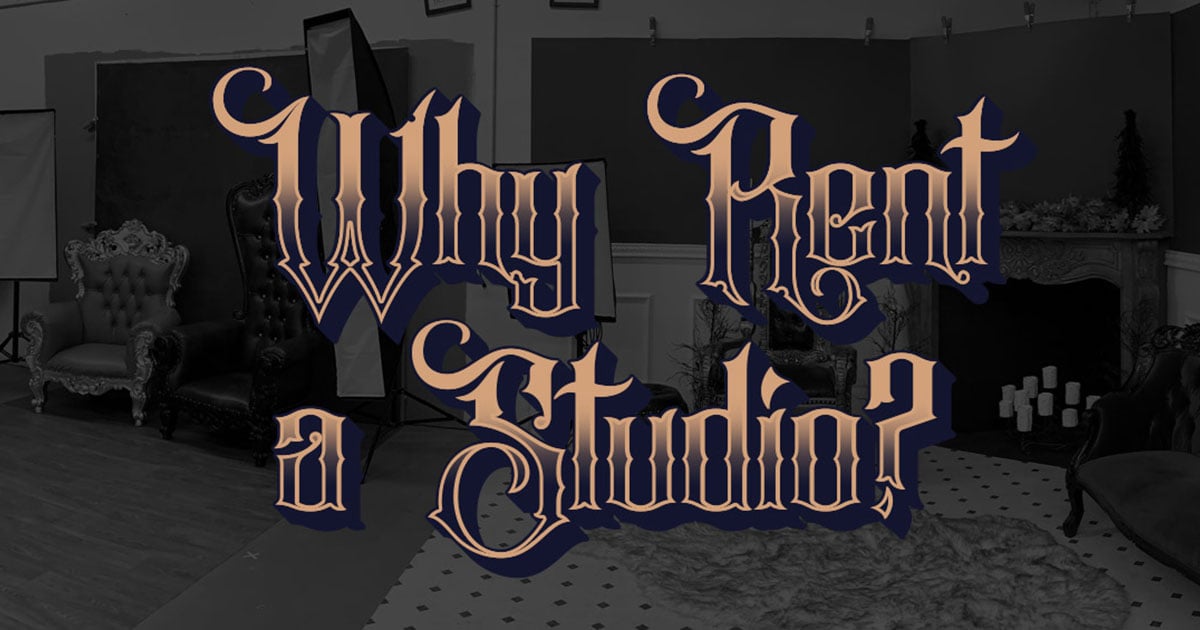 If you are like a lot of photographers, you are used to shooting outdoors at a park, the beach or on the city streets somewhere. You guerrilla shoot in interesting locations with whatever gear you have or feel you can get away with.

Maybe you’ve even shot in a hotel or someone’s house, but shooting inside a studio never crossed your mind. Or maybe it did but it felt a little intimidating with all the professional equipment. What you’re doing works for you and you may be wondering, “Why would I rent a photo studio?”

Studio shooting has a lot of great upsides but also a few limitations to consider. Let’s start with the upsides to studio shooting.

Even though most photographers don’t bother with permits many popular locations do require permits for shooting, especially here in Southern California. Depending on the location they may be more forgiving or lenient but truth be told most places photographers like to shoot have permit requirements.

Guerrilla shooting has become the norm throughout Southern California, but renting a studio means you don’t have to chance it. Sometimes the fines can be more than the permit itself.

Shooting outdoors requires flexibility and sometimes enormous amounts of it. Things like the weather, other people and even lighting can change without notice and things you planned to do may be delayed or even scrapped altogether for that shoot. You can plan to reshoot the original ideas another time, but now you have lost valuable time for your project.

When shooting inside a studio, those things are within your control. You can plan and execute the shoot without having to worry about most things out of your control.

When you shoot inside a studio there are some great creature comforts we take for granted everyday that become sorely missed when on location outside. Things like temperature control, privacy, and bathrooms become a second thought until you are in the middle of a shoot in a park, the woods or a beach and your model needs to change outfits or that large drink you grabbed on the way comes back to haunt you.

Shooting in an indoor private area will allow you to control who is around the shoot. You won’t have to deal with gawkers and self-styled paparazzi encroaching or interfering with your team. You also won’t have to worry about things showing up on social media when strangers stop and post about what they just saw.

Depending on the studio you are looking to rent your investment costs may be very minimal. Some studios will have lighting gear and accessories included as well as props and furniture. Not having to invest in these items could save you thousands of dollars long term. You also don’t have to worry about wear and tear or upkeep on that equipment.

Have some heavy gear, need help setting props, have questions about lights? Most studios have staff on hand that can assist with simple things for no charge. Some even have staff that can be hired for a small additional fee to be a grip or lighting assistant on set. You may not need those extra hands but on those small occasions when you do having someone right there you can call on can be a big help.

This definitely varies from studio to studio but you may find that the studio you are looking at has some themed props or specialized equipment that you can use or try out. This can help you try new things before you buy or invest in equipment. It could take your shoot to another level by using their accessories and props to dress up your shoot.

Even if you have your own equipment and lighting another perk of renting a studio is that you have less to haul. You can use the studio equipment instead of having to bring all of your gear with you. Or you can bring some that the studio might not have but that still means less for you to pack, carry, and haul to and from the shoot.

And now the limitations in renting a studio:

Not the biggest of issues but be aware you may be under harder time constraints. We’ve all had that shoot that is either going so well that you don’t want to stop, or, on the flip side, things aren’t going according to plan or taking longer than expected.

When renting a studio, if you run out of time, you don’t have many options. You may be able to add more time and extend, but this will depend on the studio’s calendar. If there are appointments after yours, the studio may not be able to accommodate the request.

The easy fix here is twofold: better pre-planning and communication with your team and when you book plan for a little buffer time on your appointment. Having an extra hour on your appointment means you won’t have to stress about the shoot running out of time.

This is probably the biggest downside to shooting inside a studio. Hollywood may be able to build sound stages that resemble wooded areas, beach scenes, and other large scale outdoor locations but realistically space and budget constraints will keep the majority of us from making this happen well. There are some small options like backdrops and props but it really won’t look close to the real thing on small budgets.

Items such as pyrotechnics, smoke bombs, and glitter are banned in most studios. In fact, so are messy shoots like paint and milk splatters/throws.

You should always check with the studio managers prior to booking to see what the restrictions are for a particular studio. Many times there will be no getting around these restrictions. For your team’s safety and the well being of the studio, some shoots should just be avoided or done in an open area where the danger can be controlled and a team can be at the ready in the off chance something does happen.

About the author: Slevin Mors is the owner of Elysium Studio, a rental studio in Garden Grove, California. The opinions expressed in this article are solely those of the author. This article was also published here.