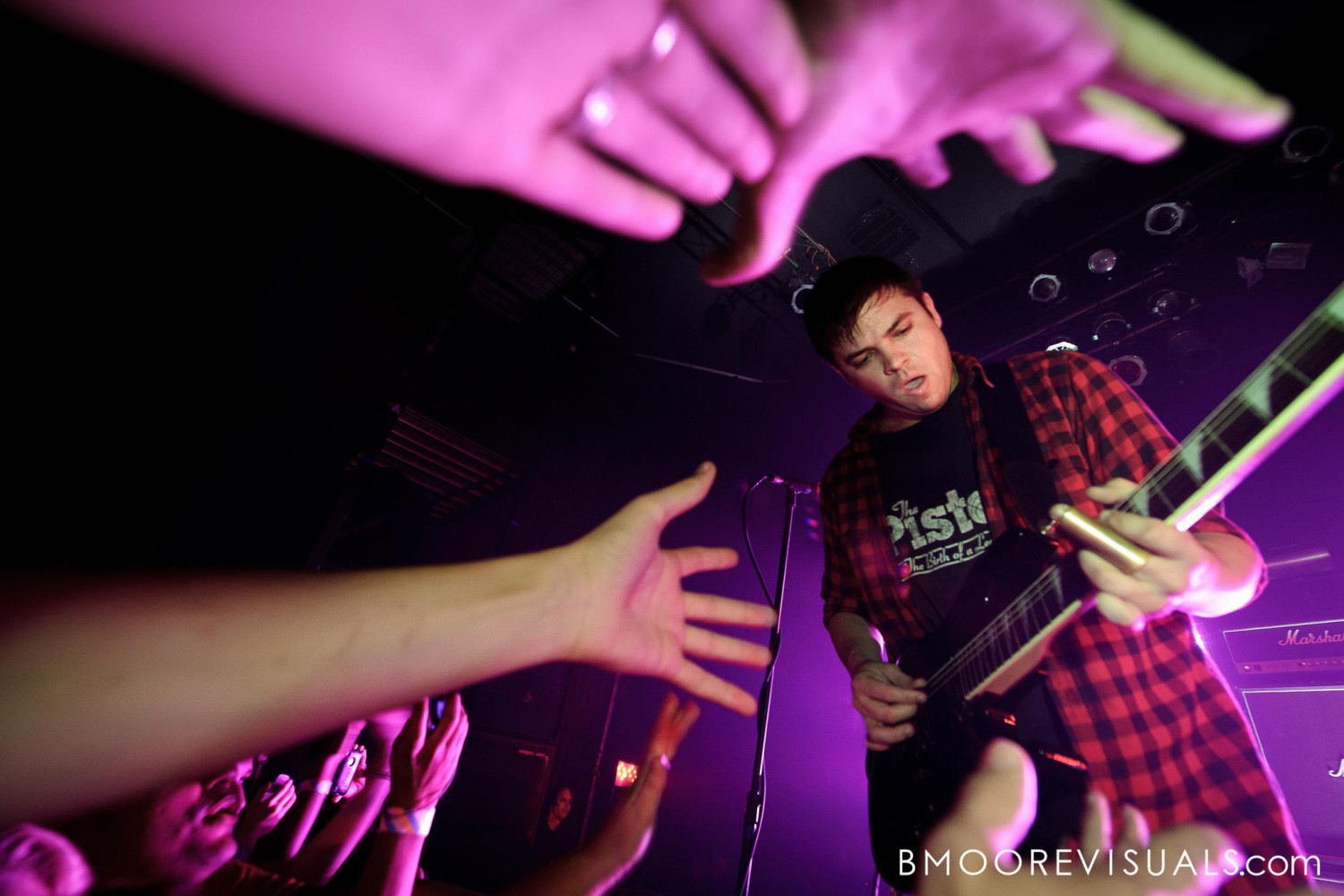 “How do I get a photo pass for concerts?” This is the question I get asked most often, and it was a question I myself asked a just few years ago. Once I had the answer, I had a front row seat to just about any concert I wanted to see.

Here is the key… You’ve gotta be shooting for someone. That someone could be a newspaper, magazine, website, the venue, the artist, the promoter, a radio station, an instrument company, and the list goes on. But that’s going to be the first question you get asked when you request a photo pass. Who are you shooting for? 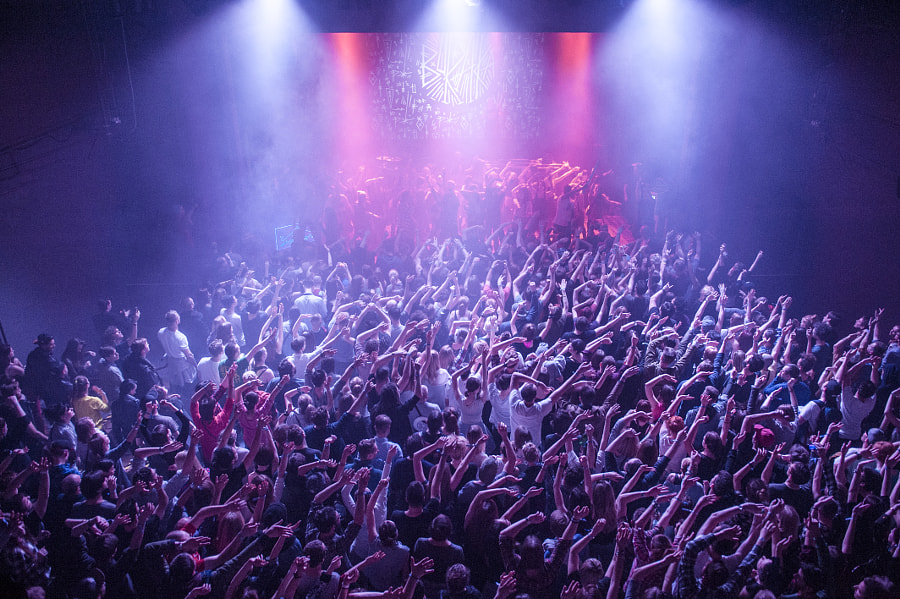 Of course, no one is going to let you shoot for them unless you’re a decent photographer. So, if you haven’t shot any concerts before, you’ve gotta start out shooting where access is easy to get. Smaller venues may not have restrictions on cameras like the big venues do. I know of at least two venues where I shoot in the Tampa Bay area that get great shows and, once you’re in the door, they could care less if you have a big camera or how much you shoot.

If you don’t have a venue that fits that description in your town, chances are you have a bar nearby that has local acts or open mic nights. Go check it out for a night or two, then introduce yourself to the acts, and ask if they’d mind if you took some pictures the next time they play. Chances are they’ll say yes, and you’ve got your foot in the door. Alan Hess, who helped me figure all this concert photography stuff out, told me about a woman in one of his classes who started off by doing exactly this and has since become a local legend. She’s even earned the respect of the local lighting directors, who make sure she has great light when she’s shooting! 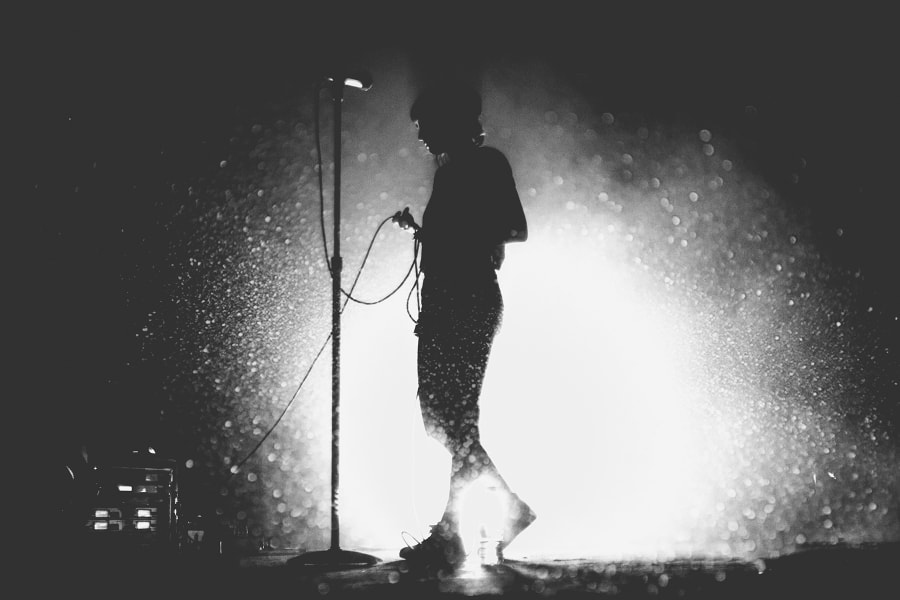 Another great place to get access is churches that host concerts. Not only is access generally easier to get, you’d be surprised at the lighting setups some churches have these days! The church I was attending when I first started shooting concerts had a decent show come through that I shot. I got some photos I liked, then used those to get access to a bigger show at a bigger church. After that, I was able to get a pass for a huge tour that plays at the biggest venues across the country. 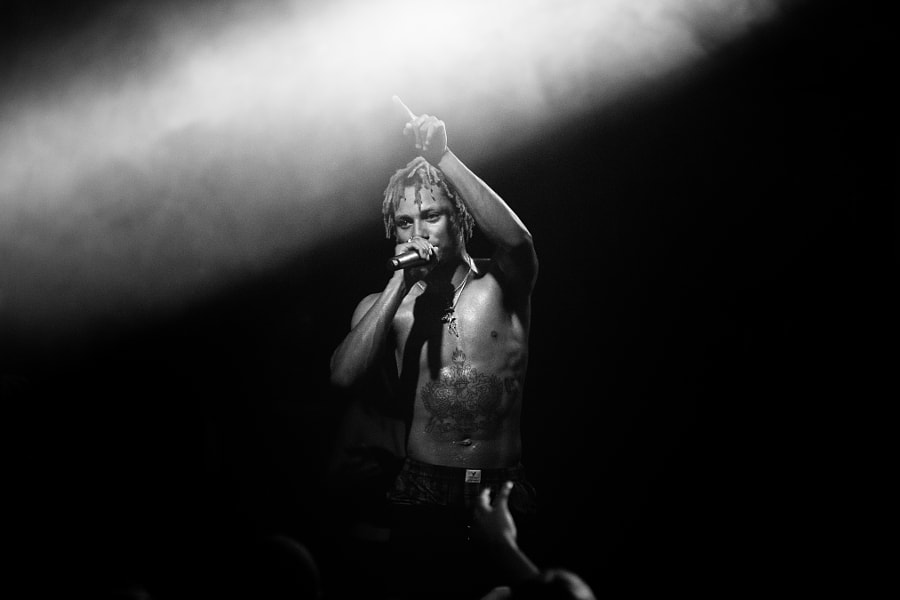 Once you have a decent portfolio built up (say 10-20 of your best photos), find a local media outlet to contact and ask if they could use someone like yourself to cover local concerts. Send them a link to your website [Yes, your website… Not your Facebook or Flickr page. Maybe this is a good place to mention that 500px has beautiful new Portfolios that make for great websites?] so they can see your work. In my case, I was able to start shooting for a local website that covered the Tampa music scene, and that allowed me access to shoot everyone from artists in small, sweaty clubs to Santana at the biggest outdoor venue in Tampa.

If you can’t find a media outlet to shoot for, things are going to be a bit more difficult for you. But, don’t lose hope yet! Go back up to the list at the beginning of this post and start contacting the other people in it. Just ask yourself, “Who needs pictures of this show?” and start reaching out to them. Eventually you’re going to find someone who says yes. Well, if you’re a good enough photographer, that is. But chances are if you’re here on 500px, you’re at least halfway decent 😉 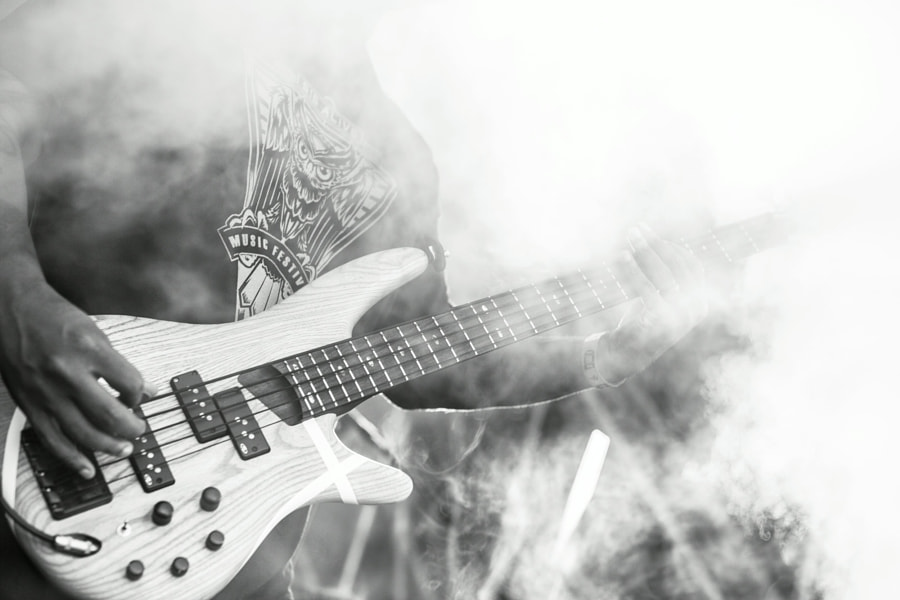 Get that photo pass

Who exactly do you contact to ask for a photo pass, and how do you find their contact info? Nine times out of ten your best bet is the artist’s publicist or manager. Finding this info can be as simple as going to the artist’s website and finding their contact page, or as difficult as using Google to try and track them down like a private eye. If the info isn’t on their website, my next stop is the About section of their Facebook page. If it’s not there, then I turn to Google and search “(Artist Name) Publicist” or “(Artist Name) Manager” and see what I can find. There are also a handful of publicity and management companies like Nasty Little Man, Big Hassle, Sacks & Co., and others that have sizable rosters, so I’ll check those. Still no luck? Try their record label. Also, sometimes a phone call can prove more fruitful than an email.

And sometimes there’s just no tracking these people down. That’s when you put your request in the (in my experience) trustworthy hands of the venue’s PR person. Someone at the venue has to be talking to the artist’s people, right? Figure out who that venue’s person is and get in touch with them. They’re normally used to handling these requests since they have to have a list of approved photographers anyway. Once you figure out who this person is at each venue, it’s good practice to copy them on future requests when you send it to the artist’s publicist/manager so they’re aware of it. 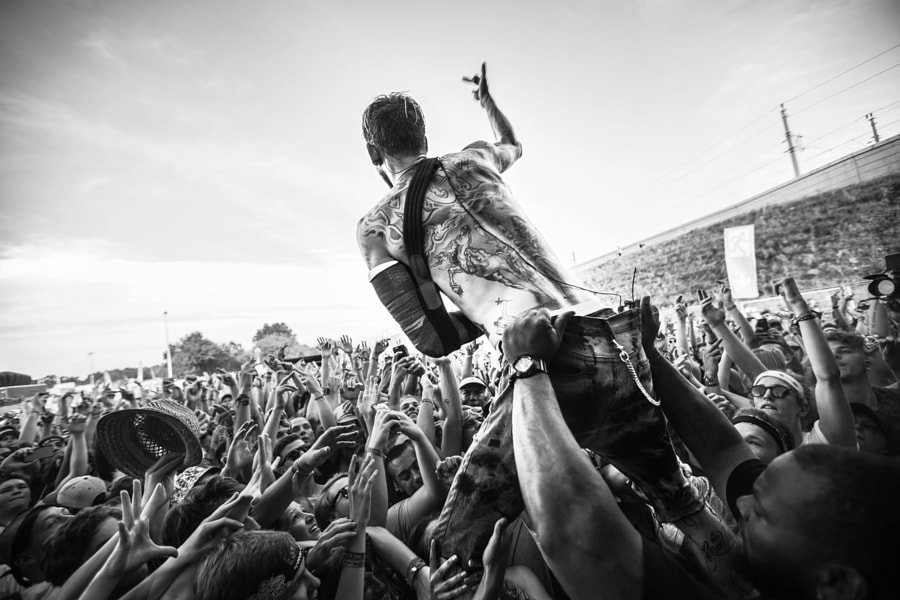 Now, the tradeoff of shooting small shows and big shows is this… Smaller shows are easier to get access to, and normally have fewer restrictions on how much you can shoot. They also have crappy lighting setups (not always, but most of the time). And they probably don’t have a photo pit separating the stage from the crowd, so you have to get there early to secure a spot up front and be prepared to stay there all night (make a quick restroom pit stop as soon as you get inside, then plant yourself up front).

As you start working your way up to bigger shows, the bad things about smaller shows become better, and the good things about them become worse. Better lighting and decent photo pits, but it’s more difficult to get photo passes and you’re restricted to the first three songs (or less in some cases). You also may not get to stay for the show unless you have a ticket, so you’re escorted into the photo pit for the allotted shooting time, then escorted out when that time is up. 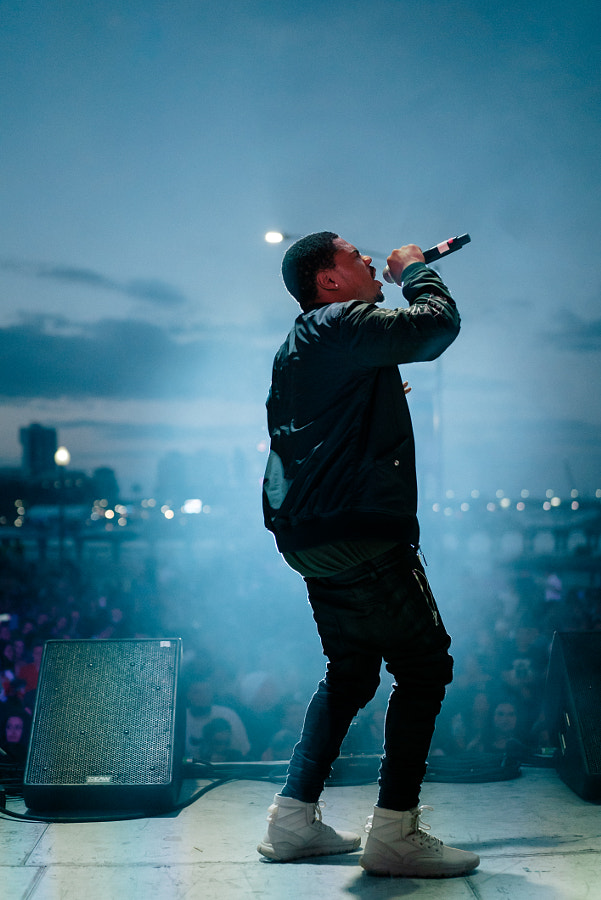 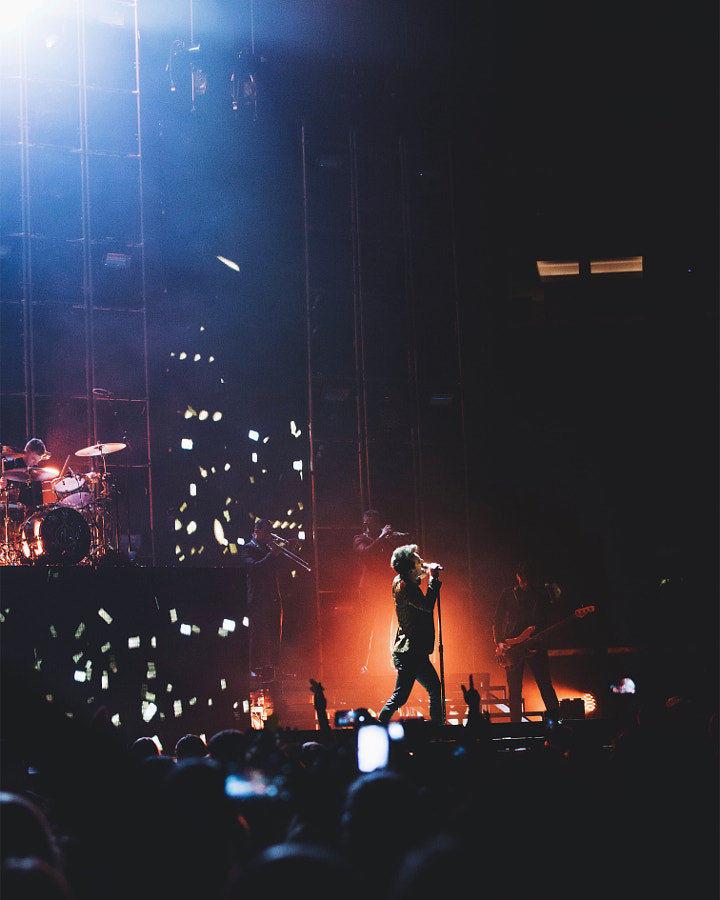 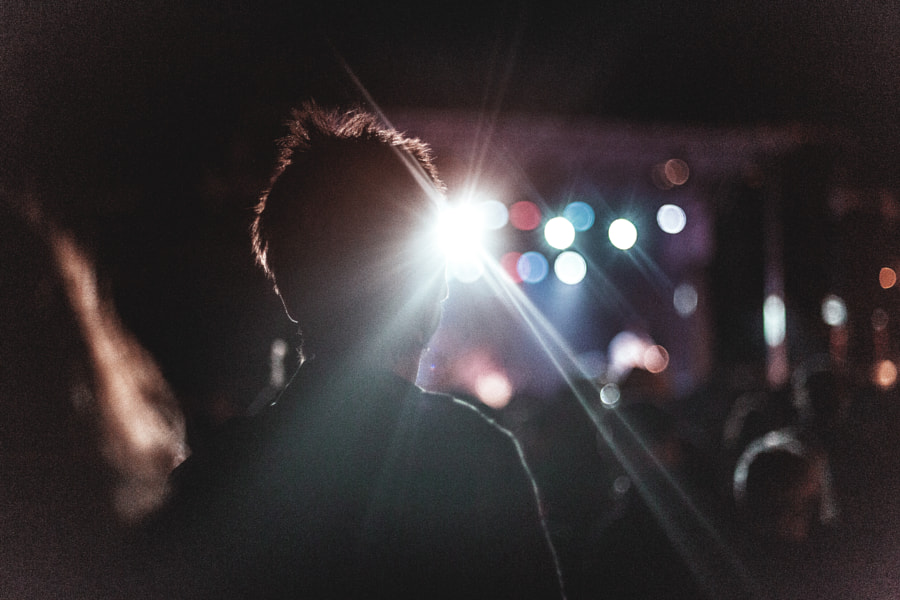 To recap, here are the three keys to obtaining a concert photo pass:

1. Be a good photographer. Start off by honing your skills at smaller shows and work your way up the chain by shooting slightly bigger shows till you’re shooting the biggest shows in town.

2. You have to ask for a pass. Know all the people who hold the keys to the access you want and find out how to get in touch with them. Go through that list until someone says yes.

3. I haven’t actually mentioned this one yet, but it’s just a rule in life that also applies here… Be nice. When you’re dealing with any of these people, be courteous and professional. If they tell you no (which they will sometimes), don’t get grumpy. Thank them and go to the next person on your list. It even applies when you’re shooting. The people you’re standing in front of paid for a ticket to see their favorite band and have been waiting months to be standing where they are. Don’t deprive them of a great show by getting in their way. There have been times where I’ve been shooting in a no photo pit situation and there’s only one person between me and the stage. If I have a big smile and ask them to switch places for just one song, most of the time they’re okay with it. If not, I ask for 30 seconds and they usually say yes to that. So, all of that to say, just don’t be a jerk and people are usually willing to help you out.

Hopefully this is helpful information, but if you have questions just leave a comment and we’ll answer as soon as I can!

Datacolor ColorReader EZ: A Tiny Tool for Color Matching and Coordination
Canon has launched a weird monocular-style compact camera – but only in Japan
GoPro Hero 9 officially announced: Yes, it has color vlogging screen and 5K30p video
20 wildlife photos that show how beautiful the animal kingdom is
How to use the golden ratio in your photography: A beginner’s guide