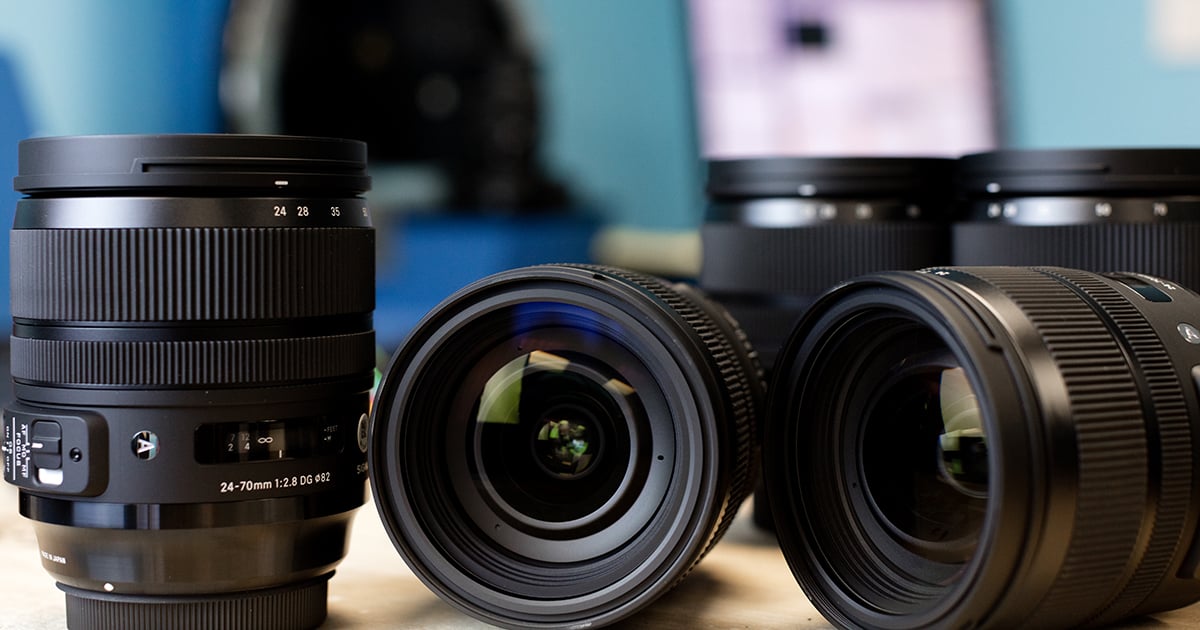 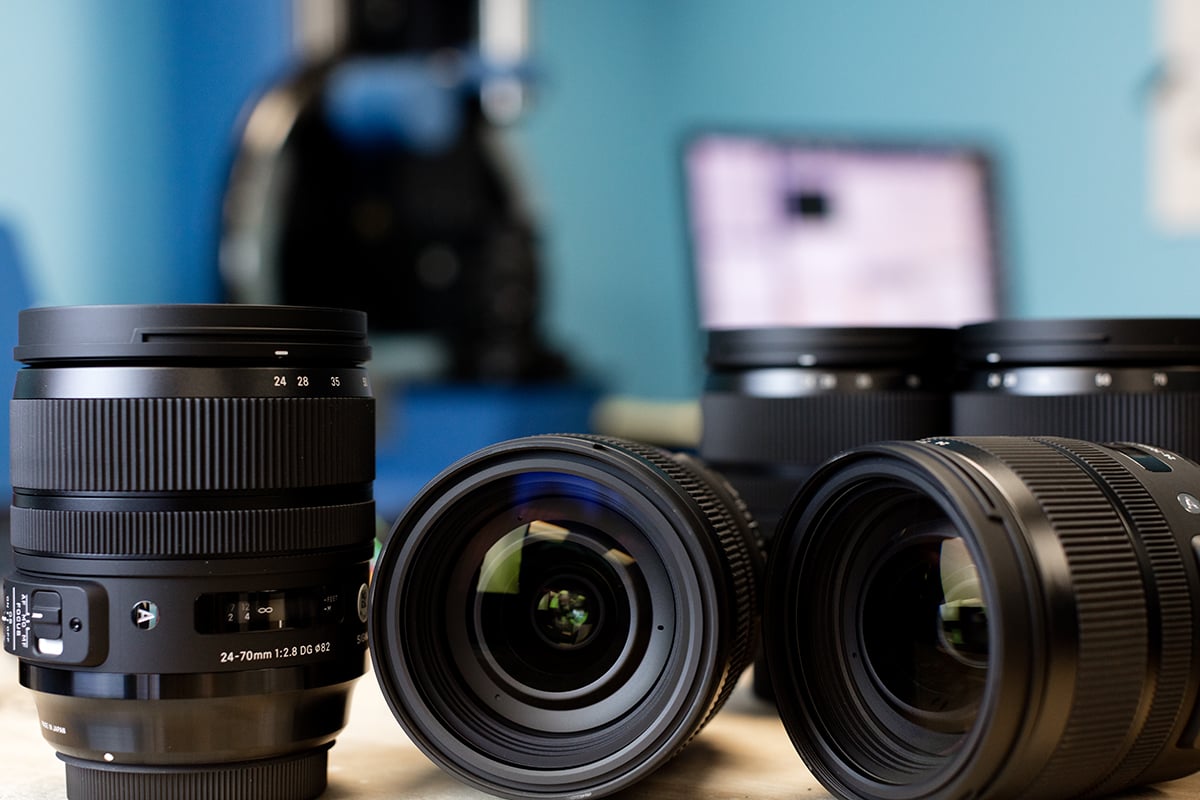 Our friend Roger Cicala over at LensRentals recently decided to take on a few optical “platitudes” that he’s always hearing, and see if the data can back them up. So, are “all lenses the same at f/8”? And is it true that you “don’t need primes because I shoot everything stopped down”? Let’s find out.

To test the lenses and compare them to one another, Roger created field curvature plots for each lens as he stopped it down. The charts show how sharpness improves across the frame and into the corners the closer you get to the “peak” sharpness around f/5.6 or f/8.

The data for the Canon f/2, for example, looks like this as you stop down: 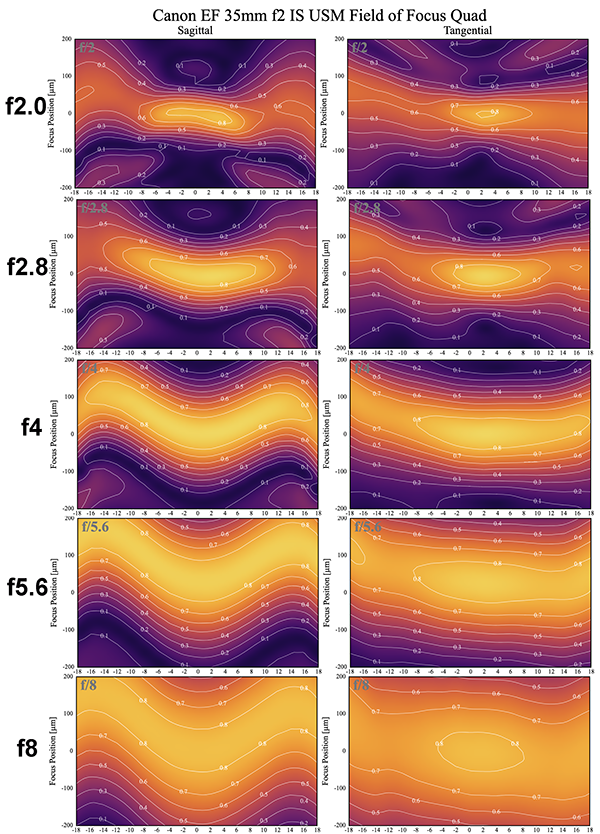 You’ll want to check out Part 1 of this series on LensRentals to learn how to read these charts, but the most over-simplified version I can possibly come up with (and which will no doubt earn me Roger’s wrath in the process) is that yellow equals sharp, the X-axis represents the distance from the center, and the Y-axis represents focus position. So the very center point of the graph represents the center of the lens with ideal center focus. If you go right or left from there, you’re moving further away from center; if you go up or down you’re front or back-focusing the lens, respectively.

There are two charts per aperture value because one chart shows the tangential and one shows the sagittal plane, which are typically sharpest at different focus positions, leading to astigmatism.

When you average out the sagittal and tangential field curvature plots into an overall graph, you get something that roughly “mimic[s] how sharp the lens is overall when you take a picture.” The average of the Canon 35mm f/2 lens at f/8 looks like this: 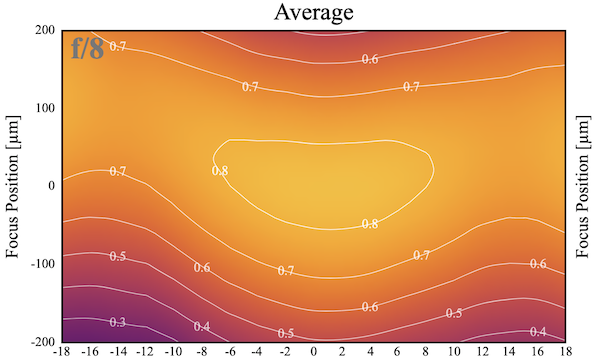 This is how Roger was able to test various zoom and prime lenses, all tested at 35mm, as he stopped them down to see how they sharpened up across the frame. It’s also how he’s able to show, pretty definitively, that those platitudes he’s tackling lack the real-world subtlety that platitudes always lack.

If you need a TL;DR of all the results, this excerpt from Roger’s conclusion should do the trick:

If you plan on shooting stopped down, a good f/1.8 or f/2 prime is nearly, but not absolutely, as good as the more expensive f/1.4 primes. A good zoom lens, even stopped down, is not as good as the inexpensive prime, at least at the edges of the image, but it will be close enough for most people most of the time. Depending on their copy. The zoom is going to be less predictable and have more variation, so that answer is a bit more copy specific.

A zoom is often the best choice of lens. But it’s never the best lens.

If, on the other hand, you’re an optics nerd and you want to dive into the details, head over to LensRentals and see all of the test results for yourself. Even if you’re not nerdy, this info can save you money, and help you avoid repeating platitudes like “all lenses are the same at f/8” or “this zoom is as good as a prime.”

Image credits: Photos and test results by LensRentals and used with permission.

Canon has released a 0.71x EF to RF speed booster adapter
Canon Purchased a Supercomputer for ‘No-Prototype’ Product Development
These May Soon Be the Standard Fees for Commercial Photos on Federal Land
Microsoft Surface Hub 2S is a $22,000 85-Inch Touchscreen That Runs Photoshop
How to Shoot ‘Water Hat’ Portraits On the Cheap