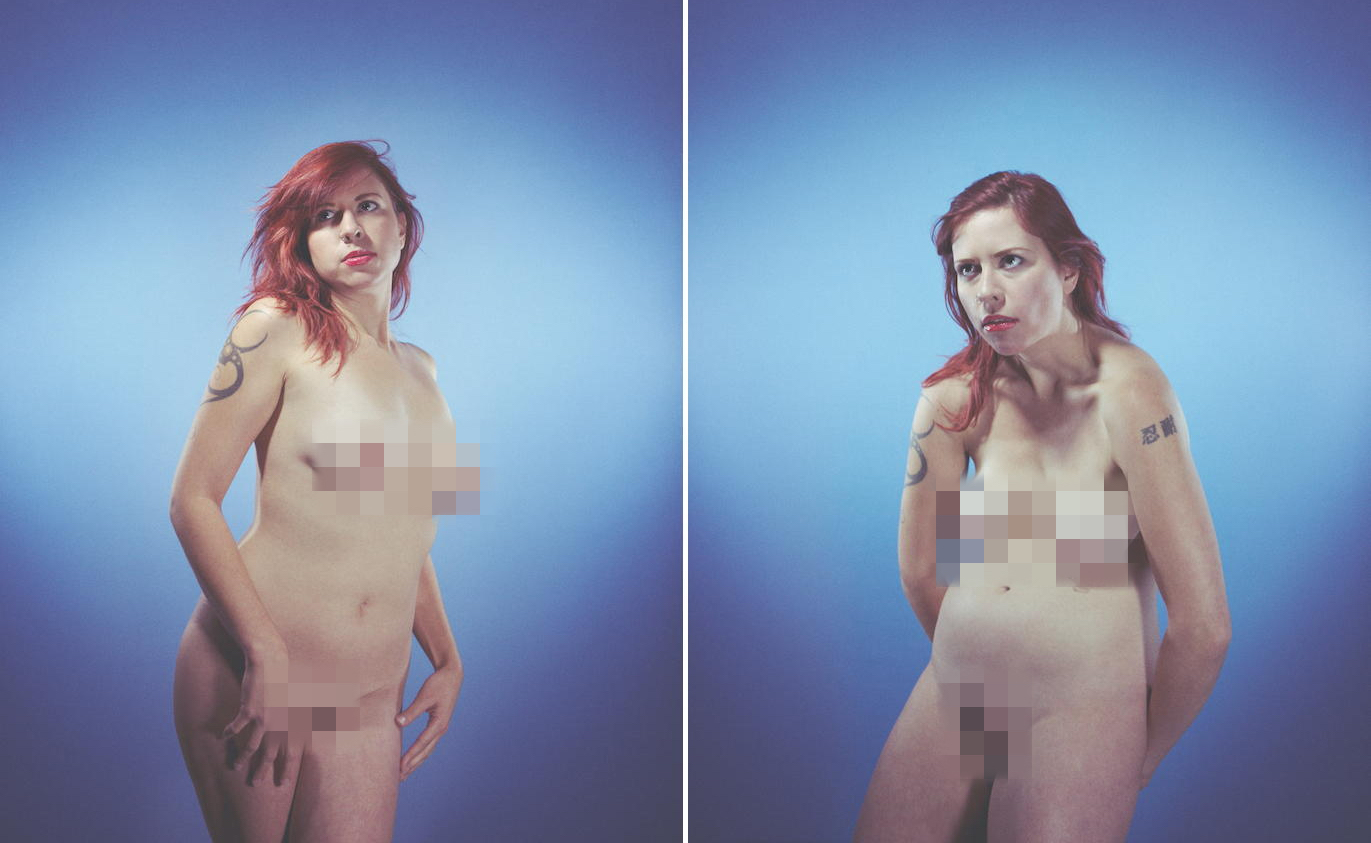 What the project eventually morphed into was a viral series of unconventional nude “before & after” photographs that challenged body image norms and spread across the Internet like wildfire in late 2013.

On one side of the frame, the subject is posing to show their best self: they’re standing up straight, confident, posed to show the way they’re “supposed to” look. On the other side is the opposite image: that same sexy stranger from before has become an unflattering mess of their own creation.

We caught up with Gracie over email recently to ask her about her viral series-turned-photobook, how it came about, the challenges she faced, and the message she was trying to send.

500PX: Did you have a specific message that you were hoping to send with these images?

GRACIE HAGEN: This series was made to tackle the norms of what we think our bodies are supposed to look like. Most of us realize that the media displays only the prettiest photos of people, yet we compare ourselves to those images. We never get to see those photos juxtaposed against a picture of that same person looking unflattering. That contrast would help a lot of body image issues we as a culture have.

Imagery in the media is an illusion built upon lighting, angles, and Photoshop. People can look extremely attractive under the right circumstances, and two seconds later transform into something completely different.

Did you find it difficult to find models for the project? How did you go about it?

I wasn’t able to capture the amount of diversity I wanted to because I have limited resources but I did the best with what I had access to.

What were the most prominent challenges you faced while creating Illusions of the Body?

GRACIE: Probably finding the amount of diversity I wanted to include. Also once it became viral I had the new experiences of a wide array of people viewing my work and utilizing the comment section of websites. I quickly learned not to read comments.

Are there any interesting/fun/strange/quirky stories that came out of shooting this series?

GRACIE: For most of the subjects, shooting the unflattering image was comprised of 90% laughter. We both (photographer & subject) were in the moment, not taking ourselves too seriously, and having a great time. I think everyone should spend a half an hour making the most ridiculous faces & poses in a mirror, it might make your day.

We remember the project being a big hit when it launched. Were you surprised by the widespread support you received surrounding the project once it launched?

GRACIE: I had never had this amount of attention & success before so yes, I was surprised. I do think, however, this subject matter is something that is universal & relevant, so I can see why it traveled so far with its popularity.

What, if anything, would you do differently if you could start the project over again?

GRACIE: I would probably try to cast more specific types of people so I could have a wider range of body types, ethnicity, genders, etc. I just want people to be able to look at the series & see themselves.

Any advice for the amateur photographers out there who admire your work, both Illusions and other projects?

GRACIE: I went through a dry spell this past year & am just now coming out of it. What I would say to every artist out there is to KEEP AT IT. Keep making things, even if you don’t want to. That is how you will progress as an artist. Read this Ira Glass quote:

Nobody tells this to people who are beginners, I wish someone told me. All of us who do creative work, we get into it because we have good taste. But there is this gap.

For the first couple years you make stuff, it’s just not that good. It’s trying to be good, it has potential, but it’s not. But your taste, the thing that got you into the game, is still killer. And your taste is why your work disappoints you. A lot of people never get past this phase, they quit. Most people I know who do interesting, creative work went through years of this. We know our work doesn’t have this special thing that we want it to have. We all go through this. And if you are just starting out or you are still in this phase, you gotta know it’s normal and the most important thing you can do is do a lot of work.

Put yourself on a deadline so that every week you will finish one story. It is only by going through a volume of work that you will close that gap, and your work will be as good as your ambitions. And I took longer to figure out how to do this than anyone I’ve ever met. It’s gonna take awhile. It’s normal to take awhile. You’ve just gotta fight your way through.

Finally, what’s next for you? Anything in the works for 2015 (or recently released) that you’d like to share with our readers?

GRACIE: This year I am just trying to get back into the habit of creating. I am trying new things and gaining confidence in my ability to create again. I’m a self-taught photographer, I don’t know much about anything relating to photography, so this year I’m into learning about it. I’m researching photographers, how they did things, and examining why I like their work. I’m also experimenting with the more technical things, something I wasn’t inspired to do before.

Mitakon Speedmaster 85mm f/1.2 for Canon RF and Nikon Z Costs $680
The Trick For Perfect “Masks” In Photoshop’s Camera Raw!
Watch a Photographer Direct Fighter Planes During a Mid-Air Shoot
If Your iPhone Has a Green Dot in iOS 14, Your Camera May Be Spying On You
Watch This Guy Turn a Classic Nikon FM into a Digital Camera