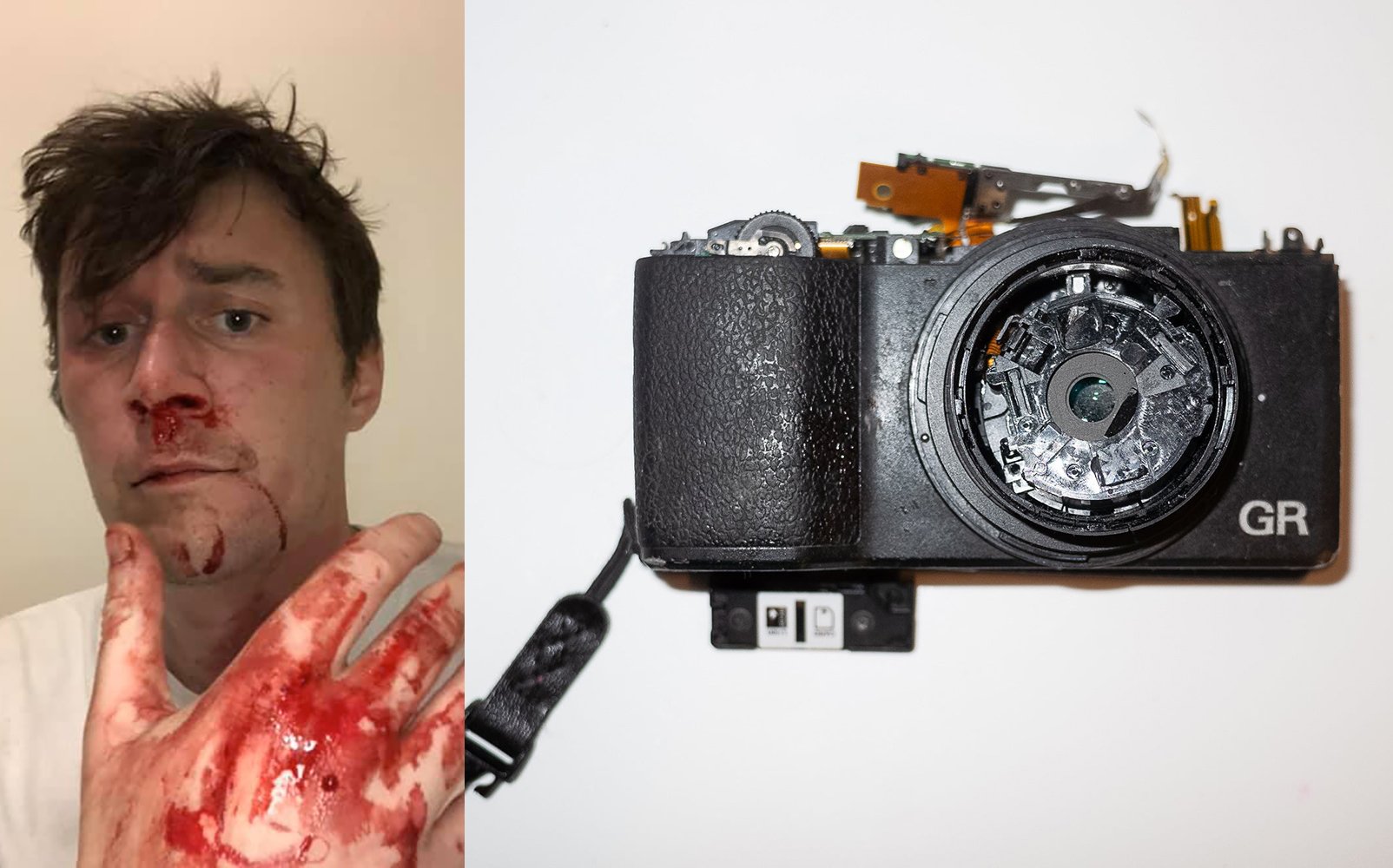 Photographer Math Roberts experienced every street photographer’s worst nightmare during the Notting Hill Carnival. As first reported by The Phoblographer, Roberts was attacked, beaten bloody, and had his camera smashed to bits for taking a photograph of a couple hugging on the last night of the event.

The incident took place on August 26th around 10:30pm. While walking Moscow Road, Roberts spotted a couple hugging and decided to take a photograph of the candid moment.

“It [happened] about 500 yards from the hotel I was staying in,” Math tells The Phoblographer. “I took a photo of a couple embracing each other on some doorsteps. Naturally, as a street photographer wanting to capture the moment undisturbed, I didn’t ask their permission.”

However, the couple noticed him and, when the woman asked unhappily if he had taken their picture, the man with her became “pretty violent immediately.”

“He punched me a few times until he knocked me to the floor (I’m only skinny!) and then grabbed my camera and smashed it on the floor (this was the most painful bit!),” recalls Math. “I apologized several times and offered to delete the photo, which I always do if someone is unhappy. But that didn’t really help at all on this occasion.”

Roberts was left bloody, his camera in pieces by his side: 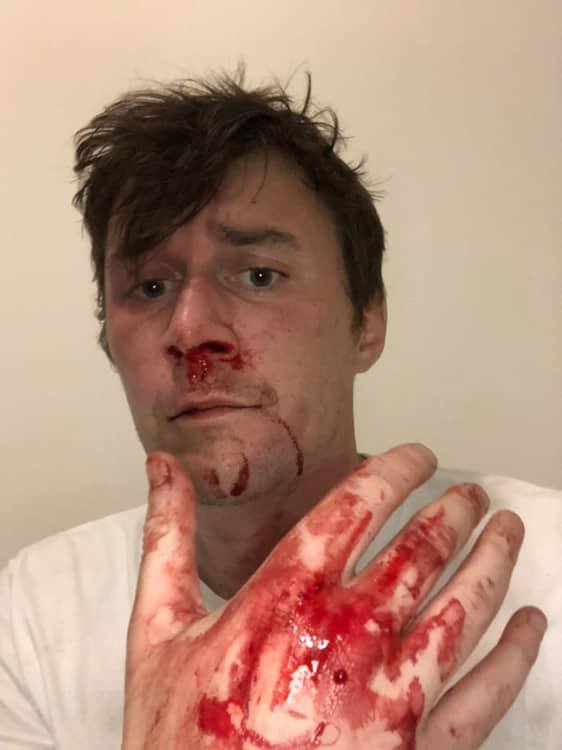 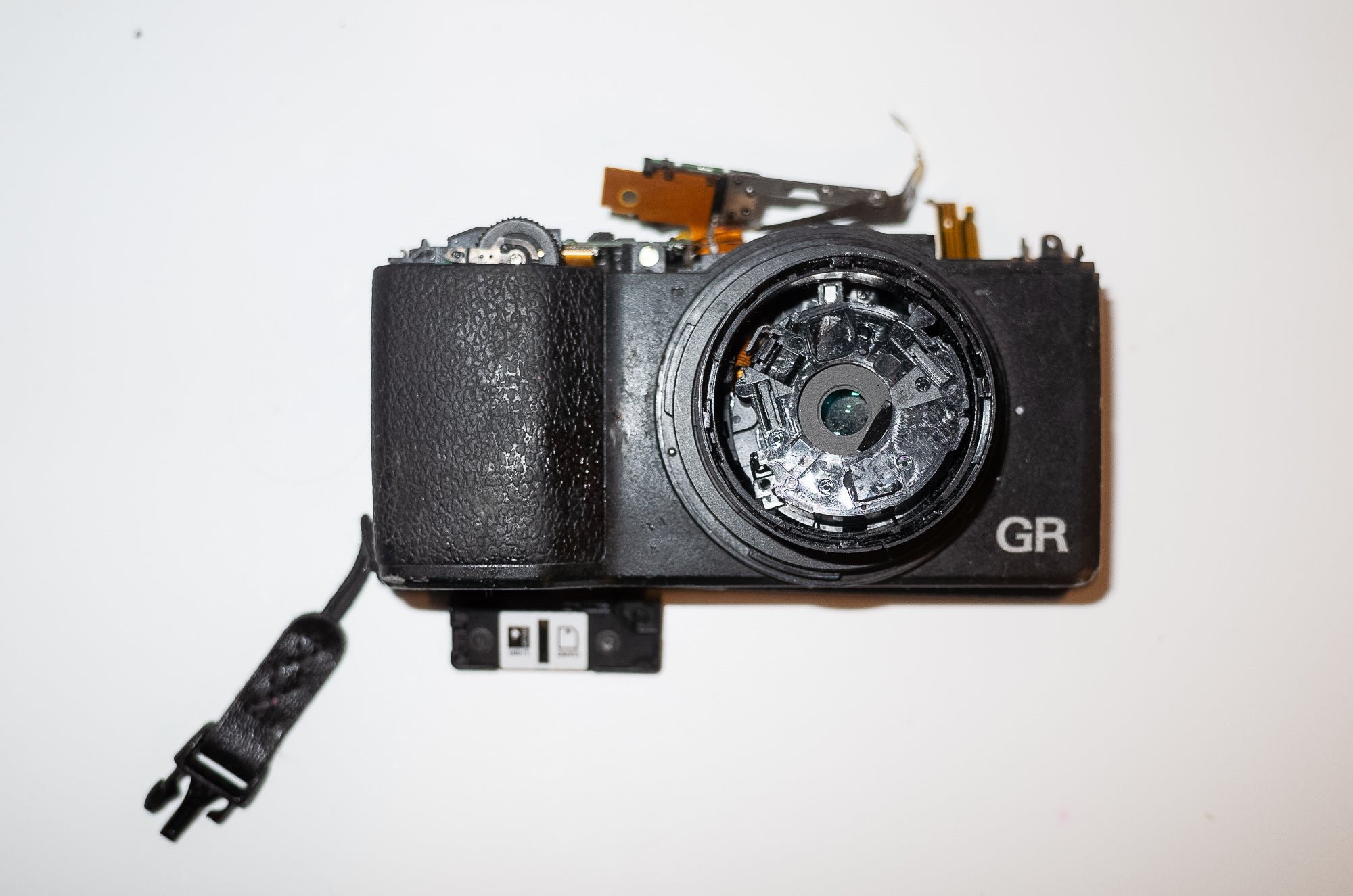 Roberts tells The Phoblographer that he did not report the incident. Since his camera was insured, and he didn’t want to go through the hassle of explaining the incident (or re-living it), he “just headed back to the hotel and had a beer.” But Roberts’ experience highlights the potential danger of candid street photography in this day and age.

In maybe 99% of situations, a simple apology and explanation will diffuse the situation; but this does not work 100% of the time, and you should be aware of this fact any time you consider taking a street photograph of a candid moment without permission. It’s a totally understandable thing to do, but has led to death threats and online witch hunts in the past.

To Roberts credit, he says the incident is not going to keep him from getting back out there, nor has it made him see street photography as unsafe. “I don’t think it has affected my confidence to shoot street really,” says Math. “I’ve taken over 10,000 street photos and this is the first time anyone has been violent with me […] Maybe subconsciously I am a little more wary about what I’m shooting, but I’m sure that will wear off soon.”

Which is good, because judging by his website and social media accounts, Roberts has a knack for this kind of photography, and it would be a shame to let one violent man ruin an entire genre from him.

Credits: Photos by Math Roberts and used with permission.

Canon Unveils the PowerShot Zoom, A Strange Monocular Camera
GoPro Hero 9 officially announced: Yes, it has color vlogging screen and 5K30p video
Here’s How Many DSLRs and Mirrorless Cameras Top Brands Shipped in 2019
Here are the new proposed fees for commercial shoots on federal land
The scorpion editing chair is actually an Autobot